Having started my blog part-way through a month, the end seems like a good day to pause and take a moment to introduce myself properly before posting a summary of what I have reviewed over the past few weeks and what I have in store for November.

My name is Aidan and I am originally from the UK though I now reside in Georgia in the US. These days it is much easier to acquire works from overseas so it shouldn’t make much of a difference in what I review but I mention it because it helps account for the occasional inconsistency in spelling as I’m at that stage where both sets of spellings and grammar rules look right to me and it can be anyone’s guess which I’ll use on any given day. 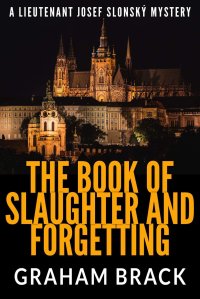 My love of mystery fiction is an inheritance from both of my parents who are both crime fiction enthusiasts. My father, Graham, is a crime fiction writer published by Endeavour Press but you won’t see his work reviewed on this blog for the obvious reason that, however impartial I may feel I am being, I am probably not distant enough from the work to be completely free of bias. For what it’s worth though, I think The Outrageous Behaviour of Left-Handed Dwarves is a really entertaining thriller that builds to a powerful conclusion. For those with relatively long memories, that book was the runner up in the 2011 Crime Writers Association Debut Dagger award. The second title in that series, The Book of Slaughter and Forgetting, comes out this November.

My mother seemed to always have a Morse or Dalziel and Pascoe book in the glove compartment of her car while Saturday and Sunday evenings were inevitably spent watching television adaptations of crime novels or original series such as Jonathan Creek as a family.

Independently of my parents, I was reading The Three Investigators, The Secret Seven and the Hardy Boys in my formative years. Sadly when I became a teen I found that the then-fledgling young adult market did not really offer much for mystery readers and found myself drawn more to fantasy and science fiction. I wouldn’t really read much in the mystery fiction line until I was nearing my late-20s and I discovered the works of I. J. Parker and her medieval Japanese mystery novels which really reengaged my interest in the genre.

These days I continue to enjoy historical crime fiction as well as reprints of Golden Age puzzle fiction or books that mimic that style. While this blog will mostly be focused on reviewing materials I have not read before, I will find the time every now and then to write a little about the specific writers who inspired me to love the genre.

My scope for this blog will be pretty wide as I interpret the mystery genre fairly broadly to include thrillers and adventure stories. I expect I will occasionally mix in a television, movie or radio adaptation or talk about original mystery series in other formats.

The Detective Wore Silk Drawers by Peter Lovesey – a case of second album blues. Lovesey has a really great grip on the Victorian sporting world but while pedestrianism seemed strange and fascinating, the world of bare-knuckle boxing is far less engaging and the crime is quite drab.

The Cheltenham Square Murder by John Bude – an entertaining read with the victim dispatched in a memorable fashion! The unusual nature of the crime forces the writer to drop in information early in the novel to play fair with the reader that does rather give things away though.

The Birdwatcher by William Shaw – a standalone crime novel and one of my favorite books of the year. The way the chapters are split between action in the past and the present works wonderfully and Shaw creates some wonderful characters. This is my Book of the Month.

The Problem of the Green Capsule by John Dickson Carr – a wonderfully plotted story that I read after being inspired by a post by The Puzzle Doctor (he uses its other title, The Black Spectacles) I read after listening to a few Dr. Fell audio dramas. I plan on digging more into Carr’s work in the months ahead.

Murder Gets A Degree by Theodora Wender – I’ll totally admit that I bought this for the tag line and the hope it would set the mood for a Halloween celebration. After a promising start it missed on the latter and it never quite decides what type of mystery it wants to be. It’s not a mystery why there wasn’t another one of these but I felt I got value for my $0.75.

Death of Anton by Alan Melville – Another book from the British Library Crime Classics range and it’s one of the best I’ve read. Witty, clever with a very memorable setting. The lighthearted tone may not be to everyone’s taste but I loved it.

A Few Right Thinking Men by Sulari Gentill – The hardest review I wrote this month because while I really enjoyed the book, I felt it missed the mark as a mystery novel which is, after all, the focus of this blog. Go check out what I wrote about it though because it is a really entertaining read. I am also very pleased that I managed to get through 800 words about an Australian crime novel with a wealthy playboy not wanting to live up to societal obligations set in the early 20th century without referencing Kerry Greenwood’s Miss Fisher.

What can you expect from me in the next month? I tend to make plans and change them on a whim, especially when I get inspired to try a book by another blogger, but near the top of my To Read pile at the moment is Death of a Busybody by George Bellairs, The Master Key by Masako Togawa and I am currently reading Say Nothing by Brad Parks. You can also expect I will be among the first in line to see the new Murder on the Orient Express when it comes out.

See you in November and thanks for checking out my blog!

4 thoughts on “October in Review”