It has been a few months since I last tackled an Inspector French book and, now that I’ve read all of his inverted mysteries, I had big plans to pick up one of the books I received at Christmas. Instead, just as I was about to pick one of them up, a super-affordable copy of The Box Office Murders fell right onto the top of my to read pile. Sorry, The Hog’s Back Mystery, but you will have to wait a little longer…

The Box Office Murders is a difficult story to summarize, not because its plot is particularly complex but because so many of its keys points are established quite a way into the narrative. Rather than risk spoiling people’s enjoyment of the story, I am opting to be a little vague about what exactly it entails.

What I can say is that this story begins with a solicitor referring a young client to Scotland Yard to speak about her experiences. This woman tells Inspector French of how she became involved in a criminal enterprise and also about the fate of a friend who was thought to have committed suicide but who she believes was murdered. When the young woman herself is found dead the following day, French starts looking into the circumstances of these deaths in earnest.

This introduction reflects one of the most significant issues that I had with the book – namely that Crofts gifts a lot of information to our hero in the form of long conversations in which key characters lay out what they know and who he should suspect. Now, I would certainly acknowledge that the way he manipulates the witness showcases some of his skills and I would also accept that this is exactly the way that the sort of crime we have here would be detected. The problem is that it will cause French to play a curiously passive role at some key points in the proceedings and so his chief contribution to this story would be to work out what the gang’s scheme is.

This is the earliest French novel I have read by quite some way and so I am not sure if this is typical of the role he played in earlier titles. It certainly presents some challenges as an approach because it runs contrary to the idea that your protagonist should be driving events. Crofts invites us to empathize with him, to share in his worries, and to follow his actions but without the actions of a secondary character he wouldn’t even know who to consider a suspect, let alone catch them. It feels rather unsatisfactory.

This is a shame because the scheme itself is an unusual one. It is perhaps not one that the modern reader can be prepared to guess because it is so grounded in the practices of the time period in which it was written but I think it is quite charmingly practical, imaginative and well thought-through.

Turning to French himself, I was rather struck by a few uncharacteristic moments of wildness in the character. Here he bends interrogation rules, breaks into houses without warrants and, in a moment of exaltation he grabs a young woman who is most definitely not his wife, kisses her twice on the lips and tells her ‘My word… but you’re the goods!”. Now, he does immediately reference that he is married but this is not the Inspector French I am used to, methodically comparing the marks made on parking tickets or examining train timetables.

As I referenced earlier, there is an important secondary character in the book who will carry out some very important work in this investigation. I liked this character quite a lot, and appreciated the time taken at the end to sum up how they were left as a result of the investigation. I appreciated that they were not just placed in a position where they needed to be rescued but were able to exert some agency on the events, coming up with a good scheme of their own. I just wish that French had been a little more ingenious in his own efforts rather than waiting for the telephone to ring.

At the end of the case, French sums it up as being ‘an unusually troublesome and disappointing one’. This is of course a gift of a phrase for anyone who wishes to criticise it but, though I have issues with the role it gives its sleuth, I do think that it scores some points for the originality of its crime. That being said, I would strongly suggest that you not make this your first taste of French as this isn’t his most ingenious case, nor the best showing of this character.

14 thoughts on “The Box Office Murders by Freeman Wills Crofts”

Have You Tried This Crofts?

Have You Read This Crofts? 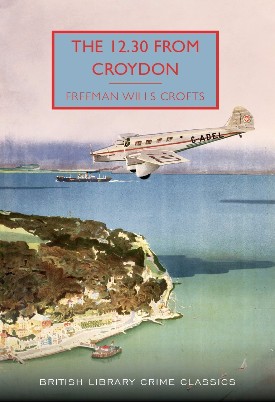