I am typically a little wary of historical mystery novels that feature historical figures or events prominently. There are certainly some very good stories that have used them thoughtfully but all too often I feel that it becomes an excuse to indulge in historical celebrity-spotting. While Bertie and the Tinman features a number of real life figures I am happy to say that they are generally used in a very thoughtful and restrained way.

The premise of this short series from Peter Lovesey was that Bertie, the Prince of Wales, fancied himself an amateur detective and had several adventures that he recorded in book form and had sealed away for a hundred years to avoid causing any disgrace. This period now being at an end, we are reading what purports to be a historical account complete with a charming editor’s note at the end that suggests that there are reasons to doubt its authenticity (not least that we should doubt that Bertie possessed the drive to complete a manuscript himself) and outlines the fates of the various characters following the end of this adventure.

The incident that this story revolves around is actually drawn from the history books, the apparent suicide of famed jockey Fred Archer as a result of delirium brought on by illness. Lovesey weaves his narrative around those historical details very skillfully to create a rich and believable story. The question is why a man who was regarded as the most skilled rider of his era would suddenly commit suicide when he seemed to be recovering from a bout of illness. While I do not share Lovesey’s love of sporting history, I think this initial premise is intriguing and certainly it provides a cast of colorful characters for us to encounter.

Bertie, the Prince of Wales, is on the face of it rather an unlikely detective and I did worry that I would find it hard to take him seriously in that role or that there would be some alterations to his character to make it work. Instead Lovesey makes a virtue of those deficiencies, presenting us with a slightly different model of investigator. He is not a great thinker, though he is certainly intelligent, nor does he possess much drive or application in conducting his investigations as at several points he hands off work to others to perform on his behalf.

He does possess the advantage of access and status however that will prove a boon to him in his investigations. In addition, he is genuinely intrigued by the circumstances of this mystery and concerned for Archer’s reputation in death. The combination of those traits made him credible to me and I appreciated that Lovesey does not gloss over his flaws.

In fact it is those flaws within Bertie that make him the most compelling aspect of this story as he has one of those wonderful narrative voices that drips with personality. This is a man who feels frustrated in his position, keen to acquire a purpose and meaningful duties yet often acting quite irresponsibly. He can be quite self-aware and charming yet he can also be an incorrigible ass, particularly in the way he treats his wife. The result is a hero, of sorts, that we can laugh with and at but whose investigation is serious and credible.

There are some memorable moments along the way, not least when his mother makes an appearance as well as some of his bedroom antics (which are written to tread the line perfectly, being more bawdy than explicit). The biographical details of Bertie’s life are well researched and the novel touches on many aspects of Victorian life and culture including the music hall scene and spiritualism.

As entertaining as Lovesey’s prose and dialog can be, I think that judged purely on the mystery elements the book would be found wanting. Perhaps because Bertie possesses more limited powers of deduction than the likes of Cribb, the solution to the mystery is unlikely to dazzle or shock the reader. Alternatively, perhaps Lovesey’s care to ensure that the solution fits the historical facts is responsible. Either way, the final third of the book lacks much of the spark and excitements of the earlier sections though I was charmed by his use of a challenge to the reader presented in the form of a bathtub realization.

Ultimately it is the charm of the novel that carries the day and makes it easy to overlook some of the weaknesses of the mystery at its heart. Bertie is instantly recognizable, credible and amusing so it is never a chore to spend time in his company while Lovesey’s attention to the details of the historical setting and character is superb. A very entertaining effort.

5 thoughts on “Bertie and the Tin Man by Peter Lovesey”

Have You Read This Lovesey? 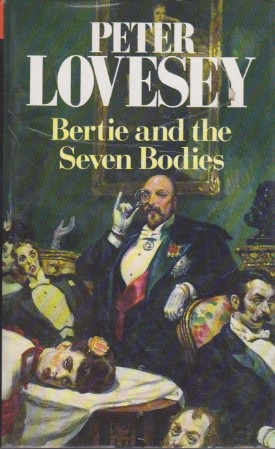