How can it be September already? It feels like only yesterday I was writing up my thoughts on my July reading and here we are with another month gone.

While I didn’t feel hugely productive in terms of my reading this month, the list of titles I reviewed seems to tell a different story. I think it probably felt that way because toward the end of the month I got stuck on a couple of novels that seemed a little harder to get myself enthused to finish and I had a run of books I started but just couldn’t get anywhere with. I figure that was a matter of my mood and hopefully if I return to them later I’ll fare a little better.

The books I read in August were:

The Adventures of Sherlock Holmes by Arthur Conan Doyle
The Ripper of Storyville and Other Stories by Ed Hoch
The Double Alibi by Noël Vindry
The Arsenal Stadium Mystery by Leonard Gribble
Nice Day for a Murder by C. A. Broadribb
The Betel Nut Tree Mystery by Ovidia Yu
Resorting to Murder, edited by Martin Edwards
Death Knocks Three Times by Anthony Gilbert
The End of Andrew Harrison by Freeman Wills Crofts
Death Going Down by María Angélica Bosco
A Graveyard to Let by Carter Dickson
Disposing of Henry by Roger Bax
New Graves at Great Norne by Henry Wade
The Bloody Black Flag by Steve Goble
The Colour of Murder by Julian Symons
The Murder of Harriet Krohn by Karin Fossum
Death Spins the Wheel by George Bellairs
Net of Cobwebs by Elisabeth Sanxay Holding
Shadows in Bronze by Lindsey Davis

There were a number of books here that are in contention for the coveted Book of the Month award. Let’s tackle some of the contenders by genre.

Starting with the historical mysteries, I really enjoyed Steve Goble’s The Bloody Black Flag, a pirate mystery, and I am looking forward to the release of the second volume this month. Similarly I had a good time with The Betel Nut Tree Mystery set in interwar Singapore.

It was not a great month for inverted stories and I would not recommend either Disposing of Henry or The Murder of Harriet Krohn though of the two the former is the more interesting book.

On the locked room and impossible mysteries front I thoroughly enjoyed Freeman Wills Crofts’ The End of Andrew Harrison and were it not for a bit of help that the detective gets at the end I could well have selected that. A Graveyard to Let was great fun too and I enjoyed getting to know Merrivale for the first time.

In terms of anthologies and short story collections, I revisited The Adventures of Sherlock Holmes and enjoyed my taste of Hoch’s Ben Snow. The British Library Crime Classics collection Resorting to Murder was a hit with me and I would certainly recommend it as one of the stronger releases. 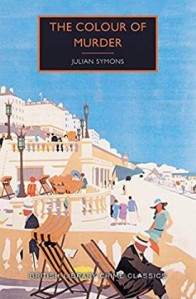 My pick for book of the month though is not any of those titles but one that somehow defies easy classification. It certainly has some aspects in common with the inverted form, though it is not exactly that sort of story. The legal drama aspects of the novel are very successful too and I think the ending is striking.

Yes, my selection for Book of the Month is the exquisite The Colour of Murder by Julian Symons, recently reissued by the British Library.

I tried to be good this month and focus on working through my formidable TBR pile but I couldn’t help making a few acquisitions along the way. I picked up Peter Lovesey’s The Last Detective and cheap copies of Sayers’ Have His Carcase and The Five Red Herrings. I also picked up Horace McCoy’s They Shoot Horses Don’t They, a review of which will be posted next Monday, and Charles Kingston’s inverted tale Murder in Piccadilly.