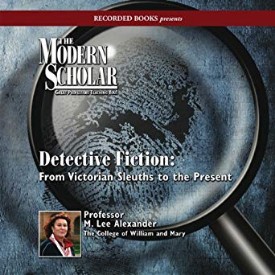 I was recently asked on Twitter how many books I consume a week and I said that I like to have three on the go at any time – a print book, a digital title and an audiobook. Typically I like to listen to the latter in the car on my way to work but as my little one gets older and starts to pay more attention I have had to be more careful about what I have playing around her.

For that reason I decided to pick up another lecture series on detective fiction to listen to on my morning commutes. Previously I had listened to and enjoyed a series produced by The Great Courses and when I spotted this Modern Scholar course I thought it would be interesting to listen to a different perspective on the genre.

Recorded Book’s Modern Scholar titles may be available through your local library though the range is now defunct. These courses are shorter in length, typically running between 6 and 14 lectures depending on the topic – this is a 14 lecture course spread across 7 CDs. The lectures are usually about a half hour long and the course is accompanied by a booklet that contains notes and, in this case, often a few extra details about some of the authors or titles mentioned.

For the most part I think lecturer M. Lee Alexander makes good choices about how to organize her material and she is never hard to follow. I do question the omission of locked room fiction which is such a significant sub genre and I think it could have been included within the Golden Age lecture. Similarly the lack of discussion of Berkeley/Iles feels like a significant omission.

My feeling is that I did not learn a huge amount within these lectures though I think they would be a good introduction for someone who is interested but is taking first tentative steps into the genre. The lecturer is careful to avoid spoiling the books (with the exception of Val McDermid’s A Place of Execution) though readers will probably get more out of these lectures if they read the suggested titles before listening to the discussion.

If you are looking for a more comprehensive course I would certainly steer you towards the Great Courses set which, while more expensive, is about double the length and is able to go into much more depth – particularly when it comes to international crime works.

The lectures break down in the following way:

Discusses titles credited as starting the genre covering titles including Murder in the Rue Morgue, Caleb Williams, Bleak House and The Moonstone and assessing those claims. It also references related genres including Had I But Known (gothic tales including Jane Eyre and The Woman in White) and Sensation Fiction.

Almost all of this lecture is given over to Holmes and his creator. The long life of Holmes is discussed and there are some mentions of imitators, spin-offs and works that were inspired in response to these stories such as Pierre Bayard’s Sherlock Holmes Was Wrong: Reopening the Case of the Hound of the Baskervilles.

Lecture 3: The Queen of Crime: Agatha Christie and the Golden Age

The Golden Age lecture almost exclusively focuses on Christie and the three sets of sleuths that she created: Poirot, Marple and Tommy and Tuppence. There is an error I caught in this section where M. Lee Alexander references the BBC version of Poirot starring David Suchet but that is a fairly common misapprehension over here. There is also a surprising amount of discussion of the Doctor Who episode The Unicorn and the Wasp (it gets more of a mention in this series than say John Dickson Carr – sorry JJ!).

This more wide-ranging lecture discusses several examples of amateurs who turn their hand to detection. The examples chosen are interesting incorporating some famous and some lesser known sleuths from Bentley’s Trent, Sayers’ Lord Peter and Harriet Vane and Chesterton’s Father Brown to the animal sleuths of Lilian Jackson Braun and Diane Mott Davidson’s culinary mysteries. I was particularly pleased to hear the discussion of Simon Brett’s Charles Paris mysteries as this was recorded prior to his return in more recent years.

Citing the hard-boiled PI as an American invention to rival baseball and jazz, this lecture covers the origins of the PI in the pulp magazines and discusses two authors in detail: Chandler and Hammett. Much shorter mentions are given to Cain, Macdonald and Parker though I was pleased that each is included.

This lecture covers Ed McBain’s 87th Precinct series and Colin Dexter’s Inspector Morse, both of which are solid selections, but also M. C. Beaton’s Hamish Macbeth which strikes me as a stretch. Maybe later stories in the series contain more procedural elements than the ones I have tried but I was unconvinced. There is a fleeting mention of Freeman Wills Crofts as a forerunner of this subgenre but I think those stories feature far more procedural elements than Beaton’s work does.

Lecture 7: Spies Among Us: Espionage and Techno-Thrillers

Here we diverge from the detective story format to talk about thrillers and spy stories. Selections include the Mrs Pollifax stories, Fleming’s Bond, Buchan’s Hannay stories, Ambler and Le Carré. There is also a good chunk of discussion of Tom Clancy’s work. Because of the number of authors being discussed there is necessarily a little less detail but I think the lecturer manages to pull things together thematically to show the diversity within these genres.

Lecture 8: In the Teeth of the Evidence: Lawyers and Legal Eagles

This lecture focuses on stories told within the legal milieu. This is another wider genre but the examples given each illustrate different approaches to this style of fiction. Authors discussed include van Gulik’s Judge Dee stories, Gardner, Traver, Harper Lee and John Mortimer. The final section of the lecture is given over to the works of John Grisham and the rise of the legal thriller.

Given that the lecturer is working with just fourteen half hour blocks, I am unconvinced with the need for this lecture when there is no discussion of, for example, the locked room form or psychologically-focused, inverted works. Particularly when about 5 minutes of the lecture is given over to discussing House M.D.

On the positive side of things, it is nice to hear about authors such as Mary Roberts Rinehart and Mignon G. Eberhart. On the modern side of things this section discusses Robin Cook’s medical thrillers, Jonathan Kellerman’s psychological crime novels (his wife Faye’s work turns up in a later segment though she is name-checked here), Patricia Cornwell and Kathy Reichs.

This lecture has a lot of ground to cover and only begins to scrape the surface of the topic but I think the lecturer organizes it well. She identifies a couple of questions which she does not answer herself but which the listener can come to their own decisions about: is it acceptable for an author to use real historical figures or other author’s fictional creations?

Authors covered include Candace Robb, Ellis Peters, Josephine Tey, Bruce Alexander, Laurie R. King, Peter Lovesey, Emily Brightwell, Barbara Hambly and Elizabeth Peters. In some cases it is worth reading the notes that accompany the course as they go into further detail on some of these authors.

One of the strongest lectures in the collection, this discusses authors including Anna Katharine Green, Catherine Louisa Parks, Patricia Wentworth, the Nancy Drew adventures, P. D. James, Cordelia Gray, Sue Grafton and Sara Paretsky. There are some interesting titles discussed and a few authors that were new to me so I appreciated being able to add a few onto my TBR pile.

This topic is really wide and, as you might expect, the lecturer is barely able to scratch the surface in the time allotted. If this area interests you I would definitely steer you to the Great Courses series which devotes entire lectures to groups of countries or areas of the world, pulling up lesser-known authors.

And if you review that list you will likely identify the issue I have with this lecture. Over half of those writers are British or American setting their works abroad. While the lecturer touches on the controversial aspect of this in relation to McCall Smith, I think it is a shame that the work of international authors are not highlighted more.

I was a little wary of this lecture given the previous one but I think it is surprisingly strong. The lecturer uses the term ‘ethnic sleuths’ to refer to characters who represent a minority culture within the area they are working.

The lecturer finishes by identifying ten trends, three of them in depth – eco mysteries such as in the books of Nevada Barr, detectives with disabilities (though the several of the examples given are drawn from the Golden and Silver Age or from television and film) and crime fiction without a clear resolution (such as Val McDermid’s A Place of Execution – be aware that this is thoroughly spoiled!).

The discussion concludes with a general belief that the genre will continue to remain popular and reinvent itself to stay in line with readers’ changing tastes.

3 thoughts on “Detective Fiction: From Victorian Sleuths to the Present”