If everything has gone according to plan the chances are you have seen several of these Reprint of the Year posts appearing on your blog feeds today so by now you are probably aware of what it’s all about. For those who stumble on my post first however I should say that Kate at CrossExaminingCrime came up with the idea of creating a Reprint of the Year award. This is a chance to highlight some of the classic and less well-known titles making their way back into print.

I was one of several bloggers asked to contribute two nominations for your consideration. The only requirements were that the books must have been republished in 2018 and that they must not be released for the first time. Later this month you will have the opportunity to make your own nominations and on the 22nd of December voting will open with the winner being announced a week later.

While I am happy to report that I have read and enjoyed a number of vintage reprints this year I was a little daunted by the task of narrowing my options down to just two titles. The books would have to be great reads of course but I felt that my nominations needed to have something extra that set them apart and makes them feel a little special.

I am an enormous fan of the design of the Pushkin Vertigo range. Sometimes when a publisher develops a house style for their covers the titles lose some of their individuality but that cannot be said for these reprints. Each title features a piece of black and white photography and a striking, vivid background color that make these books stand out on the shelves while the matte covers look attractive and modern. 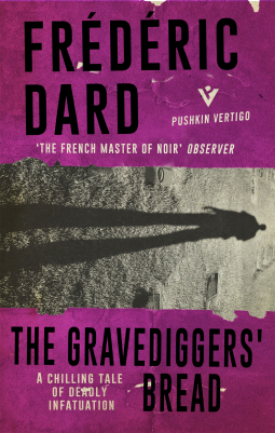 The title I am selecting from this range to be my first nomination is Frédéric Dard’s The Gravedigger’s Bread (my original review can be found here). Originally published in 1956, this is an inverted mystery story about a young man who arrives in a provincial town to find work and is offered a position as a salesman at a funeral parlor. While he doesn’t care for the work, he is attracted to his employer’s wife and stays to get close to her.

The story soon takes a murderous turn as the young man murders the funeral director and tries to cover up his crime. The remainder of the book is incredibly tense as we try to work out how he might be caught. Though it is quite economically plotted, Dard provides several surprises along the way and the book builds to a powerful and satisfying conclusion.

So, why does The Gravedigger’s Bread deserve your vote? If you haven’t tried the Pushkin Vertigo range, this is a great place to start. It is a fast, engaging read that stayed with me long after I put it down. This book is a striking French thriller that challenges the reader to predict how the situation will be resolved. It features bold and sometimes quite provocative characterizations and I think noir fans will appreciate its tone and sense of style.

Next Saturday I will be making my second nomination so be sure to check back then to see what I suggest. In the meantime, why not check out some of my reviews of other Pushkin Vertigo reprints and be sure to check out what Bev, Brad, Curtis, Daniel, JJ, John, Kate, Moira and the Puzzle Doctor select for their first nominations!

11 thoughts on “Reprint of the Year: The Gravedigger’s Bread”