This continues my series of posts I started recently about the mystery series Death in Paradise. This time we are moving onto the show’s second series which retained the core cast from the first though it is clear that there was a slight tweaking of the tone with several of the stories here containing darker elements.

While there were not many contenders for my eventual Top 5 Death in Paradise episodes among the stories from this series, I felt that the average standard was higher than in the series before. Only A Deadly Curse struck me as dull.

Other stories in the season are far stronger, particularly A Dash of Sunshine which combines excellent sleuthing with the entertaining dynamics.

Next time I’ll take a look at the third series which sees the first of many changes to the Honoré Police Station roster.

Episode One:  A Murder on the Plantation

Synopsis: The owner of a defunct sugar plantation is discovered impaled through his back with a machete shortly before he was due to make an announcement to his family at lunch.

Review: The second series gets off to a strong start with a story in which all of the suspects seem to have alibis for the murder. The circumstances of the killing are intriguing and I think the episode strikes a slightly darker tone than we found in the first series though that is balanced well with the episode’s humorous notes. Game of Thrones fans may appreciate a guest appearance by the marvellous James Cosmo as the murdered man. 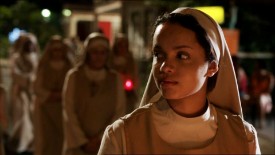 Synopsis: How to solve a problem like Sister Therese? It appears that someone has thought murder as the solution when the postulate nun is found dead in a locked room having apparently set fire to her bedding with a cigarette. The question is how she slept through it and why the fire started at the far end of her bed.

Review: This is not just a great locked room mystery, it contains some superb dramatic beats and excellent guest performances by Kenneth Cranham, Gemma Jones and Rowena King. Several aspects of the solution surprised me and I was really struck by the emotional notes of the ending.

I particularly appreciated a subplot between Dwayne and one of the nuns that gave Danny John-Jules a chance to show a different side to his character.

Episode Three: Death in the Clinic

Synopsis: A patient is found floating in the pool at an exclusive cosmetic surgery clinic. One of the doctors at the clinic claims she was suicidal but why did she prepare an expensive cup of tea which she never drank if she was planning to kill herself?

Review: The most important thing to note is that Don Warrington is back for this episode and gets some really entertaining material to work with. The mystery here is pretty good and other than a really silly and far-fetched ‘action’ moment at the end I think it works well.

One thing that I really notice in the first few episodes of Series Two is that each episode is structured to contain several significant revelations about characters towards the end of the episode, each building on the last. One of the revelations here I ought to have seen coming but I did appreciate that there were several interesting twists and character choices here.

Synopsis: A group of treasure hunters have come to the island in search of Pirate Captain François Le Clerc’s gold. Dwayne and Fidel are summoned to their camp when an explosion causes a cave-in that almost kills Daniel, the exhibition leader. When a member of the group is found shot dead the next day, supposedly in an accident, DI Poole suspects foul play.

Review: The first flop of the season. I was rather taken by the idea of a mystery centered on a pirate treasure hunt but the results are disappointing. The pool of suspects is wide but the motivations offered are not convincing and it is not difficult to identify the likely party by process of logical elimination.

Synopsis: A singer who is about to get her big break with a recording deal in Miami is murdered during her final performance on a Caribbean party boat. Camille has not only to find a murderer but process the death of her friend.

Review: This episode’s focus on Camille was welcome and I appreciated the awkward attempts from Poole to comfort her but the case itself did little to excite me. The most interesting aspect of the crime was how it takes place in the open during a performance but the suspects were a fairly forgettable bunch.

Episode Six: A Dash of Sunshine

Synopsis: A woman is discovered strangled in a holiday villa with her own scarf. Poole suspects the husband, a former colleague who was corrupt and a bully, in spite of a very tight alibi.

Review: I really enjoyed this episode which features a splendid guest turn from Neil Pearson (Drop the Dead Donkey) as Poole’s bully. This was not only interesting in the way it caused the case to develop but in the way it allowed us to see Poole’s more vulnerable side. The solution is clever too.

Returning to the idea that this series tackled some heavier themes, the episode does touch quite lightly but effectively on the idea that there is a vast disparity between the standard of living of the visitors and that of the locals. These sorts of themes make the show feel a little more serious and thoughtful and I think the writers found a good balance between them and the lighter, comedic material in this series.

The only negative I can think of is that it repeats the idea that one of the team has trouble getting past their personal involvement in a case from the previous story and it may have been better had there been a gap between the two stories. This point is treated quite differently in the two stories though so it is really just a quibble.

Synopsis: A hurricane is predicted to hit the island and a group of meteorology students will be taking readings at different points on the island. One of those students is found murdered before the storm hits in what appears to be a staged scene but each of the other scientists has an alibi.

Review: Coming off the back of one of the strongest episodes, A Stormy Occurrence may seem a little pedestrian. The episode fails to establish multiple credible suspects so the killer stands out while the unbreakable alibi is very clearly fragile long before Poole realizes it is.

That being said I still found the episode to be charming, in large part because of the attention it gives to the relationship between Poole and Camille.

Synopsis: A philanthropist is murdered in his study during a charity fundraiser he is throwing. His PA identifies the killer as a man named Jack Roberts but why would someone make an appointment during a well-attended event to commit a murder?

Review: The second series ends with a story that starts a little slowly and that took a while to grab my attention. It is only when we learn more about who Jack Roberts is that I began to feel more engaged with the case.

The solution is clever, even if it does repeat an idea used in an earlier case. I would also say that Sean Pertwee is very good as the victim, even if he is not used quite often enough for my taste.