News travels quickly and mysteriously on board ship. By the time lunch was over, the rumour began to spread that Mr. Smith’s death had not been due to natural causes.

The bibulous Mr Smith was no pillar of virtue. Crossing the Atlantic Ocean on the Enriqueta, he met someone he knew on board at midnight – and was strangled. Chief Inspector Shand of the Yard, a fellow traveller on the luxury liner, takes on the case, ably assisted by his friend Jasper Mellish. At first the only clue is what the steward saw: a bandaged face above a set of green pyjamas. But surely the crime can be connected to Mr Smith’s former – and decidedly shady – compatriots in Buenos Aires?

The Murder on the Enriqueta (1929: originally called The Strangler in the US) is a thrilling whodunit, including an heiress in peril and a jazz age nightclub among its other puzzle pieces. This new edition, the first in many decades, includes an introduction by crime fiction historian Curtis Evans.

This standalone work, focused on sensation rather than detection, relied too heavily on the foolishness of its protagonist for my taste.

Molly Thynne was an author who wrote six novels of mystery and detection in the late 1920s and early 1930s all of which were reprinted a few years ago by Dean Street Press. In my first couple of years of blogging I read and wrote about half of her novels. I found each of those stories entertaining though I had a clear favorite, The Crime at the Noah’s Ark. I don’t think I will be getting too far ahead of myself if I say right now that there is no risk of The Murder on the Enriqueta dislodging it from that spot.

The book opens with a murder that takes place on the Enriqueta, a luxury liner making an Atlantic crossing. One of the passengers, a Mr. Smith, is travelling to England from Argentina in the hopes of persuading his sister to support him financially. During the crossing however he has lost almost all of the limited funds he brought with him at the gambling tables and having exhausted the goodwill of his fellow passengers, he proceeds to get thoroughly drunk. Stumbling around he accidentally bursts into a cabin only to find himself face-to-face with someone he knows but that he wasn’t aware was on board. We never find out that person’s name but a short while later Smith’s body is found having been dumped in a corridor by a figure wearing some rather distinctive sleeping attire.

It happens that one of the other passengers aboard the Enriqueta is Chief Inspector Shand of Scotland Yard who was on board in the hopes of catching a criminal but was thwarted when they appear to have booked an earlier crossing. Learning of the murder he offers the captain his services and learns that Smith carried money forged by the man he was looking for but he is unable to find either the killer or their distinctive clothing.

Among the figures Shand interviews is Lady Dalberry who is travelling to England in mourning after the death of her husband, Adrian Culver, who had died in a tragic car accident shortly after ascending to the title of Lord Dalberry and inheriting one of the richest estates in England. She is met at the dock by members of the family including Carol Summers, a young woman who is set to become one of the richest young women in the country on her twenty-first birthday. Dalberry, a newcomer to the country, offers Carol rooms with her which are gratefully accepted but Carol soon becomes suspicious of a foreign man who appears to exert a strange hold over Lady Dalberry…

That rather complicated description of the setup for this novel reflects that the scenario feels somewhat disconnected and disjointed. While there is a murder to investigate that really is only the focus of a couple of chapters at the start of the novel. The remainder of the book is structured and plotted far more like a thriller in the mold of Agatha Christie’s Why Didn’t They Ask Evans? There is a detective at work in the background looking into some criminal matters but our focus is on the danger that a young heiress finds herself in with the dots only being connected at the very end of the novel.

One of my biggest problems with the book is its heroine, Carol Summers, who commits that cardinal sin of being perfectly aware of a source of danger yet apparently discounting it for no good reason whatsoever. Even late in the novel when she gets clear evidence of the danger to herself she opts to remain in a perilous situation in spite of the protestations of her guardians. I found this to be quite ridiculous and felt that it shifted my perception of her from naïve to reckless and foolish, significantly reducing my sympathy for her.

There is little doubt from the moment we first encounter Carol what the villain or villains’ purpose will be. We are frequently reminded that on her twenty-first birthday she will become one of the richest women in England and so the motive is a rather clear one, as is the intended means. The villains are similarly clear from the start and so there are really only two points of mystery in the novel: who killed Mr. Smith and what is the nature of the relationship between Lady Dalberry and Juan de Silva?

As I indicated earlier the questions related to the death of Mr. Smith sit entirely in the background until the end of the case so the focus of the story is almost entirely on the second of these questions. While I don’t love that these two characters’ most distinctive traits are their foreignness, I think Thynne does use them pretty cleverly and manages to sustain that mystery longer than I might have expected knowing its solution. While there are quite a few sensational developments by the end of the novel, I think Thynne had a solid idea and executed it pretty well though I think it would have worked better in a shorter form of fiction.

Thynne’s secondary characters are all fine and pretty well drawn with my favorite being Mr. Mellish, Carol’s legal guardian. He is the sharpest of the various characters concerned in this story and while Carol never follows his advice, he does his best to try and protect her. He even gets a few rare comedic moments related to his unwillingness to dance or exercise. I found myself looking forward to each of his appearances which I feel provide a little relief from the sometimes quite sensational and melodramatic tone of the rest of the story.

Still, as much as I enjoyed Mellish I sadly cannot recommend The Murder on the Enriqueta. I appreciate Thynne’s skill as a writer but the plot of this one held little appeal for me. Instead I would suggest The Crime at the Noah’s Ark or The Case of Sir Adam Braid as better starting points for exploring her work.

Have You Tried This Thynne? 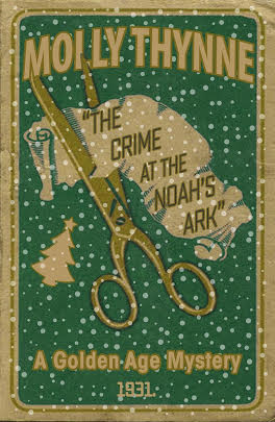