The unloading of a consignment of French wine from the steamship Bullfinch is interrupted by a gruesome discovery in a broken cask leaking sawdust and gold sovereigns. But when the shipping clerk returns with the police, the cask and its macabre contents have gone. Following the clues to Paris, Inspector Burnley of Scotland Yard enlists the help of the genial French detective M. Lefarge to check motives and alibis in their hunt for evidence of a particularly fiendish murder.

Boasting an inventive start and some clever characterization, The Cask is certainly worth your time although with the caution that it is quite unlike much of his later work.

Somehow I had managed to overlook that this year marks the centenary of the first publication of The Cask, the very first novel by Freeman Wills Crofts. Those who have followed this blog for a while will know that while it took me a while to warm to his work, I found my appreciation for him steadily growing to the point where I now consider him one of my favorite authors from the Golden Age.

I bought a copy of The Cask some time ago but I had passed over it, being put off by the page count (it is one of the author’s longer works), a few negative comments I had read and the knowledge that it would still be there waiting for me to read it later. Once I learned about the anniversary though I decided that I could not let it pass unmarked and so I would make a special effort to ensure that I blogged about it before year’s end. I started reading it one lunchtime last week and found myself staying up to the early hours that same night to finish it. Which probably gives you some indication of how I liked it.

The story begins with a group of workmen unloading casks of wine from a French ship. They discover that one is broken and that, upon closer inspection, it is not part of that shipment at all but that while it has been labeled as statuary, it seems to have been filled with sawdust and gold sovereigns. And then one of the workmen notices a woman’s hand.

Before they are able to report the matter however a man purporting to be the addressee turns up to attempt to retrieve his shipment. Attempts are made to stall him while the Police are being summoned but somehow he manages to slip away with the cask, forcing the Police to try and track him down and examine the body themselves.

Crofts structures his story as a series of three linked investigations, each led by a different character. The first section focuses on the efforts of the Police to trace the movements of the cask and determine whether the reports are accurate and, if so, whether the man who collected the cask was aware of its contents. The next section sees Inspector Burnley head to France where he gets the help of a representative of the Sûreté in trying to identify the body, why they were murdered and understand how the cask came to make its way across the channel. The final section introduces us to a new character who also conducts an investigation (and yes, that’s as much as I’m going to give you about that section).

While I enjoyed the book as a whole, I think the most successful of the three sections is its first. Part of the reason for that is Crofts manages to create a sense of constant discovery in these early chapters as the investigators learn new details about the cask and the individual who collected it, some of which are quite wild and can quite dramatically alter the reader’s perceptions of a character or the situations they find themselves in.

The next phase of the novel is far more focused on corroborating details and introducing us to the other characters involved in the matter. This cast of characters is pretty small so I think the killer will likely stand out for many readers but in spite of that the reader will have questions about motive and the means by which the matter was arranged. I would also add that while it is tempting to view this book in the context of subsequent works of detective fiction, it really should be compared with the mystery fiction published in the previous decade did not feature multiple suspects but a more readily identifiable villain. This does bridge the two styles, adhering to the idea of playing fair with the reader, but those who are only interested in playing whodunit may find themselves disappointed.

I have more of an issue with the general pacing of this middle section which often feels quite leisurely. Some of that reflects that this is a very early form of a procedural crime story and so comparing stories and paying attention to the details of the case are obviously more important than in some other forms of mystery novel, resulting in a slower storytelling style with a focus on attention to detail. Personally I enjoyed the space to mull over the information we had been given but some may feel there is not as much to discover here as it initially seemed.

I also have some issues with the final section of the novel. In particular, I think that the introduction of some thriller story beats in the conclusion fall flat and feel rather underbaked – a pity because so many other elements of the book work wonderfully. Still, the change of perspective works nicely and I found I didn’t mind revisiting some details we already knew because we got to see them from another viewpoint, throwing new light on them and on the characters involved. I found it to be largely successful because of the extra space it gives for the characters to grow and develop.

Crofts’ decision to use multiple detectives may mean that there is no one figure dominating the story, though Inspector Burnley does at least feature throughout the book providing at least a little continuity, even when he comes to play second fiddle to M. Lefarge. More importantly though it allows the book to more accurately mirror the structure and beats of an investigation, creating a more realistic procedural in which we are encouraged to focus on the details of the case rather than the personalities of the investigators.

The cast of suspects and witnesses are a little more richly realized and while several do tend to speak in a rather crisp and formal manner that can feel a little forced, the content of what they say is interesting and does set up a complex puzzle for the reader to solve. That puzzle is fair play with a solidly reasoned solution. Some may suggest that a few conclusions will be obvious to detective fiction fans but that ignores that some of the familiar ideas were much newer at the time of writing. When judged against actual contemporaries I find this to be a far more intricate and cleverly reasoned solution and one which left me feeling quite satisfied.

Other than the issues of pacing, the only other complaint I have about the book relates to the manner of the ending. Putting it in general terms in the hopes of minimizing spoilers, I find it frustrating that after lots of slow, detailed detective story buildup, the ending switches pace and tone to become something much more familiar and frankly rather underwhelming. It is not so much that it is bad, just that it feels sudden and uninteresting.

Overall then I have to confess myself pleased with the book, particularly in the context of it being an author’s first novel. I think Crofts clearly had some excellent ideas that he does justice to and while I think he would soon refine and improve on some elements of style in his writing, this was an excellent base point to do that from and a pretty good story told well.

10 thoughts on “The Cask by Freeman Wills Crofts”

Have You Tried This Crofts? 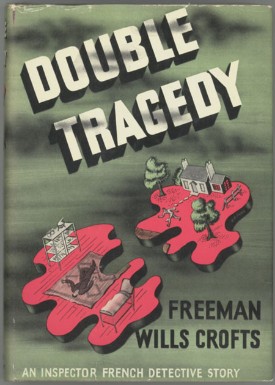 Have You Read This Crofts?