Love is full of surprises—though few compare to realizing that you’re marrying the real-life Santa. April Claus dearly loves her new husband, Nick, but adjusting to life in the North Pole is not all sugarplums and candy canes. Especially when a cantankerous elf named Giblet Hollyberry is killed—felled by a black widow spider in his stocking—shortly after publicly arguing with Nick.

Christmastown is hardly a hotbed of crime, aside from mishaps caused by too much eggnog, but April disagrees with Constable Crinkle’s verdict of accidental death. As April sets out to find the culprit, it’ll mean putting the future of Christmas on the line—and hoping her own name isn’t on a lethal naughty list…

This lighthearted novel is build around a decent mystery but it is at its most enjoyable when it leans into the silliness of its setting and concept.

In the past few weeks the weather has grown chillier and our nights longer which leads me to suspect that the holiday season is around the corner. While I am not much of one for celebrations, one tradition I do like to keep each year is reading festive and wintery mysteries in the month of December.

My first selection this year comes from the world of cozy crime fiction. Part of the fun with these sorts of books is their unorthodox sleuths – some titles I have reviewed on this blog see crimes solved by microbrewers, a former Vice President (who is now our President Elect) and even a kite seller. This book however takes that idea to a whole new level by taking place at the North Pole and casting Mrs. Claus in the role of sleuth.

After the death of her husband, April had opened a small hotel using the life insurance payout. Some time later she met Nick, a visitor from somewhere vaguely north of the Northwest Territories, and the two fell in love. It turns out that her beau is none other than Santa himself, newly installed in his position after the tragic death of his elder brother in a hunting accident. Marrying, the pair agree that they will spend their summers at her beachfront hotel and winters fulfilling their duties in Christmastown at the North Pole.

The book begins as the big day draws near when Giblet Hollyberry, a rather cantankerous elf, is found dead from the bite of a black widow spider that was in his stocking. This death came just hours after he had a heated argument with Nick in which he had called him a murderer and things look even worse for Santa when April sees a note written in his handwriting calling Giblet ‘a venomous elf’. Could April’s husband (who is, let us remember, Santa) be a murderer?

So, a lot of the fun in this book comes when the book leans most strongly into its rather ludicrous premise giving us rivalries in Santa’s workshops, fights between the various Mrs Clauses (both Nick’s mother, the Dowager Mrs Claus, and his elder brother’s widow) and a splendidly silly second murder of a different type of yuletide figure. The tone is definitely silly and in my case I smiled more than I laughed but it was a fun, lighthearted read that did a decent job of delivering on its premise.

I quite enjoyed April as the narrator of this story and I think her voice is used well, balancing moments evoking sympathy with ones that seem to suggest that she recognizes the craziness of the situation she has found herself in. The story never calls on her to do anything outrageously outside of that character’s likely experience or ability, and so she I found her pretty easy to accept. If I have any reservations at all, I think a few aspects of her character and background remain a little loosely sketched – for example, I remain a little confused about how old she is meant to be.

I also felt that the references to her life away from Christmastown and her squabbles with a busybody neighbor via email never seemed to have much purpose in the context of this story, particularly given how easily they could be resolved. Happily these diversions are rather limited and perhaps they will be more relevant in future installments.

Turning to the details of the mystery, I feel that the initial setup is pretty engaging. The evidence against Nick is fairly clear and this gives April a solid reason to get involved, particularly given her feelings about whether the elf constabulary will be up to investigating its first murder case. The stakes of her investigation are clearly communicated and the details of that crime seem fairly clear, making it easy to understand the initial facts of the case.

Similarly I think that the author also does a pretty solid job of expanding on this initial setup to add complexity to their plot, incorporating additional murders and providing the reader with a wealth of suspects of consider. While I think some characters stand out as more likely than others, the author does a good job of keeping most credible until pretty late in the novel.

Unfortunately when it comes to the solution for that mystery, I was a little less convinced. Though Ireland does well to maintain the reader’s suspicions of her various suspects, some are clearly more likely than others. By the time we near the resolution, the reader does stand a pretty good chance of guessing that guilty party’s identity. The problem is though that I think that is all the reader can do – guess.

The issue for me is that while I felt the evidence leant towards one character, there really is nothing definitively proving it. That means that when April does attempt to accuse the killer she cannot really prove what she is saying, making it more a really well-informed suspicion rather than a reasoned deduction of that person’s guilt. In spite of that however I did find the overall ending to be entertaining and satisfying in its handling of the character and her situation.

Most importantly, I found this ending to be in keeping with the overall tone of the book, keeping its sense of fun even as it injects a little peril into the mix. That lightheartedness helped to make this a quick and entertaining read that delivered much of what I wanted from this book – something light and silly.

Apparently Mrs Claus and the Santaland Slayings is intended to be the first of a new series of books. I am a little skeptical about the idea that this premise is sustainable as an ongoing series but I enjoyed this first one enough that I can imagine myself picking up the next for a future festive reads project.

Have You Tried This Cozy? 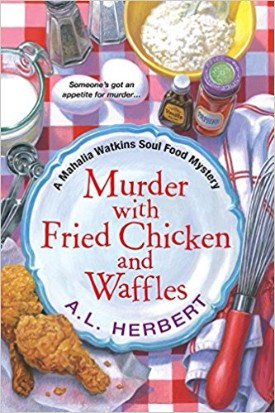